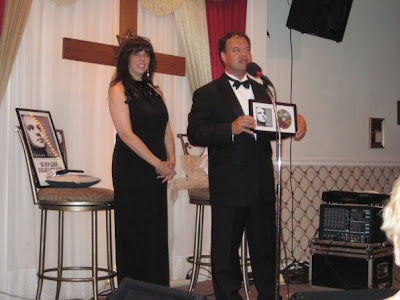 *
It really gives me great personal pleasure to announce to you that my good friend, Recording Artist Frank Rendo, of Long Island, NY, has made the WHLI TOP 50 RELEASES OF 2009, coming in at # 29 for his latest CD, "DELIVER ME." http://www.whli.com/
*
CONGRATULATIONS, Frank!
*
If you are a regular RamblingsRegardingRendo reader you have undoubtedly previously read about this outstanding CD that Frank released at Samantha's Li'l Bit of Heaven on September 5, 2009 to a most excited and anticipatory sold-out, full house! www.SamanthasLilBitofHeaven.org (Pictured: Samantha Tetro/Frank Rendo)
*
"DELIVER ME" has 12 tracks and some very special music is represented throughout this one. The single, DON'T LAUGH AT ME enjoyed airplay throughout various areas of the US, and continues to be played on WHLI regularly.
*
Frank was supported by many various artists throughout these selections, to include Palma Pascale, Peter Eldridge, Fred Guarino and Jonathan Rayson. The CD boasts 3 Palma Pascale original compositions.
*
Frank gives special thanks to Paul Richards, General Manager of WHLI Radio, as well as Joe Satta and Bob Perry, also of WHLI, who play his music, often. In particular, Frank is thankful to his co-producers, Palma Pascale and Fred Guarino. (Fred is owner of TIKI Recording Studios, Glen Cove, New York). http://www.tikirecording.com/
*
Said Frank: "...And special thanks goes out....of course to my production cohorts, Palma Pascale and Fred Guarino whose lives had and have continued to bless me with their presence, music, laughs, expertise, musicianship and companionship..." (Readers may already know that mutual friend Palma Pascale died on September 8, 2009, after a courageous, lengthy illness). Our sweet Palma is missed more and more, each day!
*
Here is an excerpt from the "DELIVER ME" blog, found below:
*

I recently told Frank that I found each one of the songs seemingly better than the one before it. It’s like a circle – there is no end to the creativity, beauty and majesty of them.
*
Though some of these cuts were initially recorded at various other studios at different times along the way, the final touches for this CD were completed at Tiki Recording Studios in Glen Cove, Long Island, New York. http://www.tikirecording.com/ Frank was surrounded by a group of extremely talented individuals as he added to, or freshly recorded these selections.
*
Fred Guarino, owner of Tiki Recording Studios and a gifted guitarist, masterfully & painstakingly engineered this CD for Frank. I recently visited the studio as Fred was mixing one of the selections, and I must say that I marvel at his abilities. Fred can hear things
I’d ne 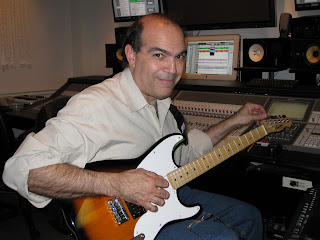 ver pick out – yet, because of this man and his immense talent, these important pieces are able to be heard as they blend beautifully to make the recording the best quality it can be. In part, because of Fred’s musicianship, he is adept at listening well and he knows what to listen for! But, the way he maneuvers the recording equipment to obtain the maximum effectiveness just blows me away. His talent here is sheer genius. It would certainly take more than a paragraph or two to
describe things he has finessed, here. Suffice to say – he’s one brilliant engineer! Pictured above: Fred Guarino)
*
Musical

direction for DELIVER ME was in the capable hands of Frank Rendo and my dear friend, composer, arranger, orchestrator, singer – multi-talent Palma Pascale. http://www.palmapascale.com Palma’s creativity, her musical ability and her overall recording capabilities know no bounds. Palma composed three of the glittering selections on this CD and Frank’s interpretation of them is stunning! Palma expertly added orchestration, vocals and a good dose of encouragement to Frank throughout the process of completing this recording.
*
Palm and Frank work very well together – their voices blend perfectly and together they truly compliment one another.(pictured: the late Palma Pascale)
*
And another excerpt about just one of these 12 wonderful selections:
*

ALL I EVER TAUGHT YOU is a 2009 Palma Pascale composition. This selection has been strategically placed in this spot in the line-up as a “response” to the previous track, MISSION OF LOVE.
*
Frank shared with me that he feels these two complement each other well, as MISSION OF LOVE is all about the despair of an individual being judged, whereas this selection teaches us all a lesson NOTto judge one another. I recall how excited Palma was when she described to me that she had written this one as she believed the message was such a vital one that needed to be heard; and of course, she is so right.
*
The story is relayed from God, who is displeased with the hatred, evil and greed He witnesses:
*
“…It’s a shame you couldn’t love them as I taught you. It’s too bad that you decided something different.
It’s a sin – you took the words I meant for good and turned them into judgment swords with which to pierce the hearts of man.
It’s a shame you didn’t understand my meaning. You let arrogance and judgment cloud your view. I’ll be watching from above, so tread lightly as a dove, and remember, All I ever taught you was to love…”
*
Didn’t I tell you? A remarkable story set to such a dazzling melody that is, again, captured expertly by our Mr. Rendo.
*
Frank’s vocals are so evocative…not embellished here, but delivered in a straight-forward, gentle fashion. His read of this awesome composition is perfect – and the listener is being treated to such sensitivity and warmth throughout the piece.
*
Dominick Avento joins Frank in creating the rich backing vocals that are heard as the second verse begins.
*
Now – let’s talk about the composition, itself. I think this creation is a perfect vehicle for Frank. Palma’s treatment orchestrally does exactly what it is supposed to do – enhance the vocalist’s story. I have often written that Palma is so adept at having the chosen instruments “speak” to the listener as clearly as the lyrics do. She uses an English horn at various places throughout this one – she once told me how she felt an English horn was a sort of mild sounding instrument that lends a specific quality to a song – to me, it’s a combination of beauty tinged with sadness.
*
The English horn takes the lead, but surrounding that is a delightful grand piano, along with guitar and soft, warm strings. Not fussy at all –yet one instrument compliments the other so well. Each one fills an empty corner, when needed, to support Frank’s handsome vocals.
*
There is a very dynamic modulation leading into the final verse that serves to bring us all to that next important level of intensity. I love the swirling string run Palma does, here. Frank softly and gently takes this one out as the song ritards, so as to accentuate these last, thoughtfully penned lines:
*
“…I’ll be watching from above, so tread lightly like a dove, and remember All I ever taught you was to…..love…”
*
Such an expressive and touching composition! 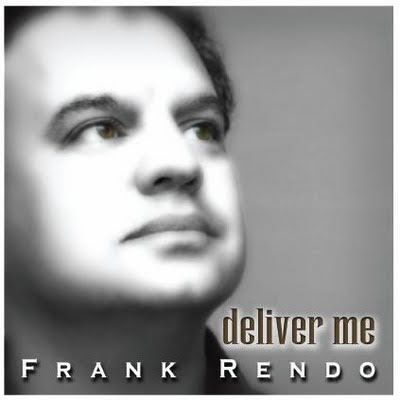 And finally:
*
The theme woven throughout the lyrics and heightened by the melodies in this masterpiece is, indeed, pointing not only towards one’s propensity toward identifying their own inner conflict, but also knowing it is He we can turn to in order to find the needed answers to resolve our conflicts and find true peace of mind.
*
This collection has touched me personally, on many different levels, time and again. Bravo to Frank Rendo, and all who participated in the making of this spectacular CD. What a gift we have been given.
*
“…Remember - - - - - Deliver - Me…”
*
My personal kudos and congratulations to Frank on this outstanding accomplishment! Making WHLI's TOP 50 NEW RELEASE list is a well-deserved compliment to the amazing talent that is......Frank Rendo!
*
Get your copy of "DELIVER ME" today at www.cdbaby.com, or by writing to Frank at FrankRendo@Yahoo.com, or to me at bmjfan@mchsi.com. Digital downloads are also available at www.cdbaby.com
Photos courtesy of Dominick Avento III, and Frank Rendo.
Posted by Martini at 5:06 PM