Hello all and welcome back! It’s time to ramble on a bit more about the extraordinary voice of Frank Rendo (pictured), and his collaboration with the unparalleled talents of Palma Pascale, all captured expertly by 5 time Grammy nominated engineer and owner of TIKI Recording Studios in Glen Cove, NY: Fred Guarino. 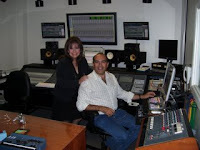 This is the next song on the CD and it has to be my very favorite – it’s not the most elaborately orchestrated song – quite the opposite is true, actually. Yet, I find Palm’s “less is more” concept working nicely here as it comes into play in this standout beauty entitled “Joseph’s Song.” (pictured: Pascale/Guarino)

This enchanting selection, (which gives us, the listener, a prospective, for a change, from the mind of Joseph, the earthly father of Jesus, who asks the question repeatedly; “How could it be?”), begins with a tasteful solo piano intro. A cello is quickly introduced to embellish the melody line, and before these 8 bars of intro are through, Palma effectively adds a host of strings, and then drops back to piano only, once again, as Frank enters with that impressive voice of his, to, for the first time, ask the question on the mind of the carpenter:

Frank’s voice inflects the question being asked – that is, he sounds to be imploring the answer to his questions…he makes this phrase sound as though he is incredulous at the very thought that this baby, this sleeping child that he is holding is, in reality, the son of God! It’s remarkably done! The song continues:

As Frank begins the vocal on “Lord, I know” we hear that “celestial tinkling” of the bar-chimes used to musically launch gracefully into the verse. Frank is artfully accompanied here by Palma at the grand piano, as well as an orchestra of strings, including that solo cello, and an oboe is used, though sparingly, to add that little bit extra spark of interest and beauty to the song at this point.

As Frank goes into the chorus, the music swells with him as he sings:

The writer of this touching Christmas composition’s lyric, Michael Card, made it clear that his take on the story was that nobody was more overwhelmed than this “simple carpenter” Joseph, was about the arrangements made by God. It is especially clear in the lines “How can a “man” be father to the Son of God” and again in the repeated question, “How could it be?” Joseph himself is just dubious that he is to fill the role of father to the son of God, as any “man” would, undoubtedly be, wouldn’t you guess?
Frank & Palma in vocal booth 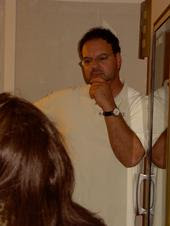 This skepticism of Joseph’s is easily reflected in the voice of Frank Rendo. So many emotions are heard through this man’s stunningly beautiful voice as he asks these questions of God. The richness and fullness never leaves Frank’s voice – the depth of it remains, yet it’s tenuous-sounding at the same time, giving us the idea of confusion, doubt and disbelief, all rolled-up into this truly amazing vocal instrument.

And, of course, Frank’s questions are augmented by the lovely simplicity, yet intricacy of the accompaniment, so aptly provided by Ms. Pascale. There are too many little subtleties to describe, but I can tell you that the listener is overwhelmed by the story being told, both by the vocalist and the instrumentalist.

The next verse is so poignant, and again, the emotions of it are conveyed so completely by Frank’s interpretation as he sings:

“…He looks so small…His face and hands so fair---
And when He cries, the sun just seems to disappear.
But, when He laughs, it shines again….how could it be?...”

The orchestra and the voices, now complete with beautiful three-part harmony, increases the intensity level that discerning notch, and it is, simply, lovely. The rolling cymbal crashes add a depth and energy that, coupled with everything else, will send that familiar “chill” down your spine, for sure, as Frank repeats:

To this writer's mind, this is more than just a song – it’s a prayer, and one that is exceptionally told by Frank.

As an aside: I gravitated toward this selection almost immediately, and I knew I wanted to do it for my church congregation – I wanted to tell this wonderful story from the perspective of Joseph. I had never heard this Christmas tune before I heard Frank do it on REMEMBERING CHRISTMAS.

There was only one service where there was room to “work-in” this song, since REMEMBERING CHRISTMAS came out rather late in the season of 2007. Therefore, I listened very carefully, over and over……and over again to the beautiful accompaniment of piano and orchestra, and with little time to use, I made a track; imitating as much of Palma’s work as I was capable of. Next, I listened to Frank’s interpretation of this outstanding song, and, after lowering it ½ step, I finally felt that I was as comfortable with it as I was going to be and I sang it at the Christmas Eve candle lighting service – and there was NOT a dry eye in the house when it was over. NO…it didn’t come out as I had intended, because, you see, MY own father, who died in 1991.......... was a simple carpenter. That evening, three of my nieces, who do not normally attend the church where I direct the music, showed-up to celebrate with me. And, as I began singing this song, I became overwhelmed with a staggering emotion. The earthly father of the son of God, too, was a “simple carpenter” just like my own father was who, of course, I miss very much. This thought hadn’t occurred to me until I this very night. I looked up at my nieces, just as I sang the words “…He looks so small….His face and hands so fair…” and at that moment, I thought I wouldn’t be able to finish. Yet, the grace of God kicked-in, and the Holy Spirit led me to a much softer, partially-sung, partially spoken version….and though I’m not so sure I did Frank or Palma proud by my rendition this night, the congregation definitely connected with the beauty of the music, and of the story, which was, after all, the reason I wanted to offer them this selection. They definitely “got it,” I could tell. Before the season comes around again, I will take my time and attempt a closer reproduction of Palma’s orchestration so that I can do it again this year, and ask that question that was so amazingly captured by these three wonderfully talented individuals from New York….."How could it be?..."

Until next time, I wish you all my very best,
~Martini